“Basil Hallward is what I think I am: Lord Henry is what the world thinks of me: Dorian is what I would like to be—in other ages, perhaps.” – Oscar Wilde 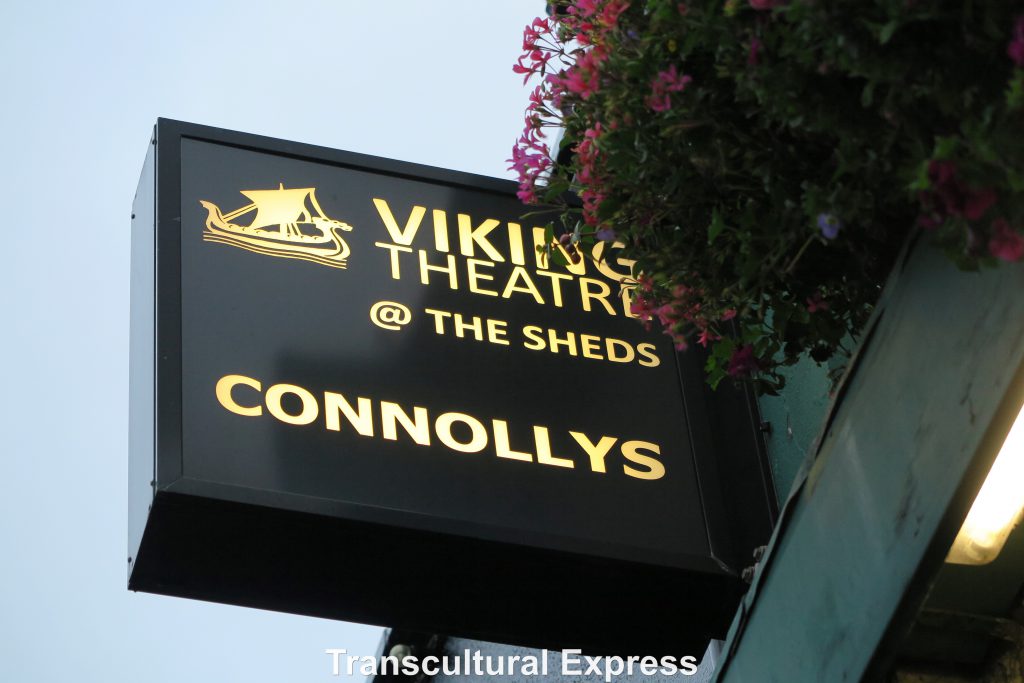 One of the incredibly fortunate aspects of having moved to an apartment in Clontarf is that we are exactly five minutes away (on foot!) from the local theatre. It is a very small theatre. However, it is all the better for that. I love the intimacy of a tiny theatrical space – and the ingenuity that must be employed to use it. The Viking Theatre in Clontarf is almost certainly the smallest theatre I have been to, and so it is also the most intimate, most ingenious, and most enjoyable too.

Tonight we went to see the latest Viking production, The Picture of Dorian Gray.

We happened to be strolling by about a week ago when I saw the poster for this play, pointed it out to my wife, and she expressed much interest in seeing this particular story. I was very glad as I was afraid my wife, whose first language is not English, would find a trip to the theatre too difficult, but she was keen to go and in the end she enjoyed the performance immensely – so great credit to the actors there.

The Viking Theatre itself sits above Connollys, The Sheds; a pub on Clontarf Road which has a great reputation for pouring the perfect pint of Guinness. The theatre, which opened in 2011, though tiny, also has a reputation for putting on brilliant shows. Here is their own write-up:

“Since its foundation in November of 2011, more than 120 productions have graced the stage of the Viking Theatre. Established to provide an outlet for small cast plays with little or no funding, it has gone from strength to strength, playing an essential part in the development and staging of many successful productions, including several world premieres and revivals… …this gem of a theatre has made a major cultural impact not only in Dublin but nationwide… …Realistic ticket pricing and the informal pub setting have added greatly to the popularity of the Viking Theatre, gaining it a loyal and enthusiastic patronage… …The Viking Theatre receives no funding whatsoever, but proves that with perseverance, professionalism and creative desire, a little ambition and ingenuity can go a long way in these difficult times.”

Well, we saw a much of that ingenuity tonight. A three-man cast put on a sterling production of Oscar Wilde’s classic tale of a devil’s bargain that leads a beautiful young man into dissipation and corruption. The Picture of Dorian Gray is one of those books that I have long been meaning to read, and so I picked it up and started to read it in advance of seeing this show. I was pleased by how closely this production stuck to both the spirit and the letter of the novel. In some ways I felt they improved upon it. Large parts of the novel consist of very witty people saying very, very clever and oh so amusing things to each other, interspersed with flowery descriptions of garden settings or lavish interiors. It is all very gorgeous and entertaining, but as a novel it can be a little repetitive and tiresome. As a play however, this story works perfectly. High praise to the production and to the actors for making us believe that in this tiny space, for a short period of time, we had slipped into the decadent world of Oscar Wilde’s Victorian London. I am always impressed by the talents of those players who by swiftly donning a different costume or voice can make you believe they are entirely other people. Michael Winder as delicate, high-strung Dorian, along with Michael James Ford and Simon Coury as his respective good and bad angels put on a terrific show.

After the show we went downstairs for a drink and I indulged myself in a very well poured pint of Beamish. I’m pleased to say I have taken a liking to the Sheds pub too. It is a nice setting for a pint. And the pint was very good.

For more information on both the pub and the theatre check the links below: