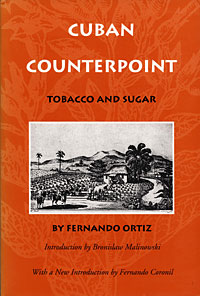 “I am of the opinion that the word transculturation better expresses the different phases of the process of transition from one culture to another because this does not consist merely in acquiring another culture, which is what the English word acculturation really implies, but the process also necessarily involves the loss or uprooting of a previous culture, which could be defined as deculturation. In addition it carries the idea of the consequent creation of new cultural phenomena, which could be called neoculturation. In the end, as the school of Malinowski‘s followers maintains, the result of every union of cultures is similar to that of the reproductive process between individuals: the offspring always has something of both parents but is always different from each of them.”

– From Cuban Counterpoint: Tobacco and Sugar